Please Note: This article is written for users of the following Microsoft Word versions: 97, 2000, 2002, and 2003. If you are using a later version (Word 2007 or later), this tip may not work for you. For a version of this tip written specifically for later versions of Word, click here: Plain Text Pasting as the Default.

Plain Text Pasting as the Default

When you paste information in a document, from the Clipboard, there are generally several different ways that Word can paste it. If you do a Ctrl+C or a Ctrl+X to place information on the Clipboard, you can see the different ways that Word could paste the data by choosing Paste Special from the Edit menu to display the Paste Special dialog box. (See Figure 1.) 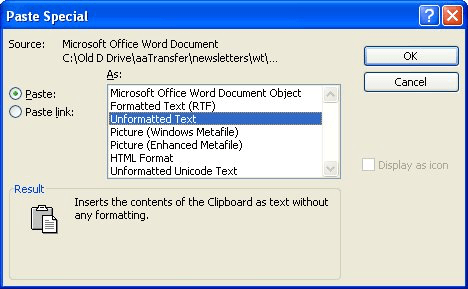 Of course, when you press Ctrl+V to paste, Word must choose one of the available pasting methods to use in the actual paste operation. The method chosen by Word depends on the type of data you are pasting.

If you do a lot of pasting of text from other programs, you may want to make the default pasting method Unformatted Text, which means that the text is placed in the document with no formatting whatsoever. (The same as choosing Unformatted Text from the Paste Special dialog box.) There is no way to configure this in Word, but you can use a very, very simple macro to do the pasting for you:

WordTips is your source for cost-effective Microsoft Word training. (Microsoft Word is the most popular word processing software in the world.) This tip (3856) applies to Microsoft Word 97, 2000, 2002, and 2003. You can find a version of this tip for the ribbon interface of Word (Word 2007 and later) here: Plain Text Pasting as the Default.

Tab stops allow you to modify the horizontal position at which text is positioned on a line. Word allows you to preface ...

Need to get rid of extraneous spaces before or after the text in a string? VBA provides three different functions you can ...

When you first create a worksheet, all the cells in that worksheet are formatted as locked. As you unlock various cells ...

Line Breaks After a Slash

Some writers use the slash to combine words and as shorthand to signify "or" or "and." This, of course, makes for some ...

Simple page numbering is easy to add to your documents. More complex numbering (such as two numbering schemes in the same ...