Please Note: This article is written for users of the following Microsoft Word versions: 97, 2000, 2002, and 2003. If you are using a later version (Word 2007 or later), this tip may not work for you. For a version of this tip written specifically for later versions of Word, click here: Exactly Positioning Text.

Word folks, on the other hand, are quick to point out that Word includes an ADVANCE field which allows you to position text. For those familiar with advance's easy interface in WordPerfect, the ADVANCE field can seem downright archaic. You basically follow ADVANCE with a series of switches that indicate, in points, how the text that follows the field is to be positioned. Some switches (\l, \r, \u, and \d) are used to move the following text relative to the foregoing text. Other switches (\x and \y are used to move the following text a specified distance based on something other than the foregoing text. For instance, \x moves to a horizontal position relative to the column, frame, or text box in which the text is located. The \y switch moves to a vertical location relative to the page as a whole.

Confusing? Much more so than in WordPerfect. To make matters worse, the \y option moves not only the following text, but all the text before and after it. The switch also won't work if the field is located within tables, text boxes, footnotes, endnotes, comments, headers, or footers. It also won't work if the point specification you provide is outside the margins of the current page. In addition, the \x option doesn't allow you to specify a horizontal position relative to the page, but only to layout constructs within the page (column, frame, or text box). 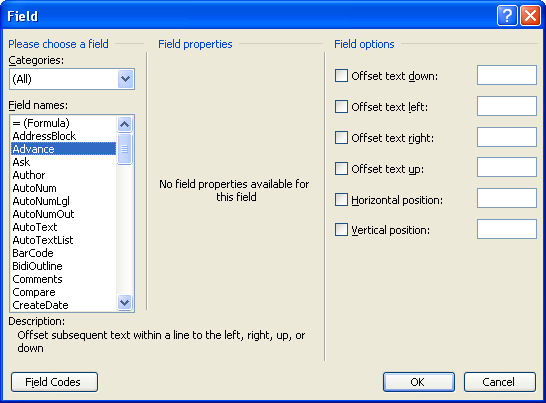 For most people, the ADVANCE field remains not only archaic, but arcane to boot. It is just plain confusing. For this reason, most people position text in a Word document by using other features, such as tables, text boxes, frames, or some combination of these. The positioning of tables and text boxes is much easier to control. For positioning relative to surrounding text, you can use the Before and After settings in the Paragraph dialog box to add the desired amount of space.

WordTips is your source for cost-effective Microsoft Word training. (Microsoft Word is the most popular word processing software in the world.) This tip (7347) applies to Microsoft Word 97, 2000, 2002, and 2003. You can find a version of this tip for the ribbon interface of Word (Word 2007 and later) here: Exactly Positioning Text.

Understanding Word's Object Model and how it relates to macros in VBA.

When working in Word's dialog boxes, most people understand that you should enter measurements using inches. If you don't ...

Determining Columns in a Range

If you need to know the number of columns in a particular range, you can use the COLUMNS worksheet function. This tip ...

Inserting the Subject in Your Document

One of the properties you can specify for a document is a subject. You can then use a field code to insert this subject, ...

Want a quick way to create fractions? You can do it by using fields, as described in this tip.

The COMPARE field is rather esoteric, but it can be helpful when you need to compare two values using fields. The result ...

I don' have the "Advance" in the field dialog box

It seems the option Advande y no longer works in Office 2013, nothing happens. Does anyone got a solotion for this? We use it a lot in templates a.o.