Please Note: This article is written for users of the following Microsoft Word versions: 97, 2000, 2002, and 2003. If you are using a later version (Word 2007 or later), this tip may not work for you. For a version of this tip written specifically for later versions of Word, click here: Pictures Move on their Own.

Pictures Move on their Own

Have you ever placed pictures in your document, expecting them to stay in a set location, and then you find that they moved around? This is not uncommon in Word, and typically can be traced to a misunderstanding about how Word handles pictures.

When you place a picture in a Word document, you can place it either inline or floating. The default placement method depends on the version of Word you are using. Inline pictures are great, and will stay exactly where you put them, because they are treated like any other character in a paragraph.

Floating pictures are a different story. Floating pictures can do just that—float. Also, the picture can be formatted so that text floats around the picture. To control the floating behavior of the pictures, Word provides an anchor that indicates a point in the document with which the picture is associated. You can see these anchors by choosing Tools | Options | View and making sure the Object Anchors check box is selected. When you subsequently click on a floating picture, you will see an actual anchor character at the point in your document where the selected picture is anchored.

To modify how the picture's anchor behaves, you simply need to right-click on the picture and choose Format Picture from the Context menu. Word displays the Format Picture dialog box. Click the Advanced button on the Layout tab. (See Figure 1.) The resulting dialog box has a tab labeled Picture Position where you can specify the placement of the floating picture. (In other words, you can specify how the anchor should behave.) 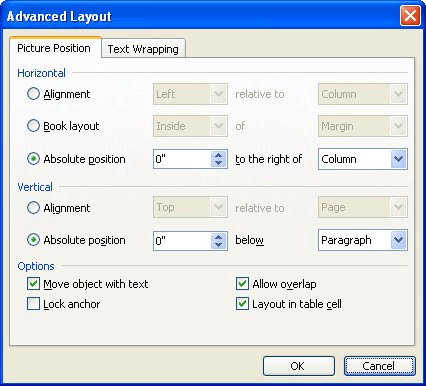 There are two important check boxes on the Picture Position tab; both are at the bottom of the dialog box. The Move Object with Text check box controls whether the object moves as the text to which it is anchored moves. Thus, if a picture is anchored to a paragraph and you insert text before the paragraph, the picture is moved down as the paragraph—and its associated anchor—moves down the page. If the check box is cleared, then the anchor moves, but the picture stays put where you placed it. This check box is selected, by default, so pictures normally move with their underlying text. If you don't want them to move, clear this check box.

The other important check box is Lock Anchor. This check box controls whether the anchor can move or not. Normally, if you click on a picture and drag it to a new location, the anchor for that picture is changed to the paragraph nearest the new location for the picture. If you lock the anchor, the anchor stays put, even though you moved the picture.

Many picture positioning problems can be solved by understanding the controls on the Picture Position tab. You should play with them to find out which combination of settings is best for your use of pictures.

That being said, some people find that they can get better control of where pictures are placed simply by placing the pictures inside other objects. For instance, you may want to create a single-celled table and place your picture in the table cell. Likewise, you may want to create a text box and place the picture in the text box. Either approach is appropriate if you are more comfortable working with tables and text boxes than you are in working directly with pictures. In addition, using pictures in this way gives you other options that you would normally have. For instance, you can apply borders to the table cell or to the text box, thereby creating a border around your picture.

WordTips is your source for cost-effective Microsoft Word training. (Microsoft Word is the most popular word processing software in the world.) This tip (1743) applies to Microsoft Word 97, 2000, 2002, and 2003. You can find a version of this tip for the ribbon interface of Word (Word 2007 and later) here: Pictures Move on their Own.

Sometimes making sure that a reference in a formula doesn't get changed is not as simple as putting dollar signs in front ...

Examining Styles and Macros in a Template

Saving AutoText Entries with Each Document

AutoText can be a great way to add consistent, common text to a document. Unfortunately, you cannot save AutoText entries ...

Getting Pictures Out of Word

If you receive a Word document from someone, you may want to get any graphics it contains into their own files. You can ...

Need to select a lot of graphics in the document? Here's an easy way to do it using tools available on the Drawing toolbar.