Please Note: This article is written for users of the following Microsoft Word versions: 97, 2000, 2002, and 2003. If you are using a later version (Word 2007 or later), this tip may not work for you. For a version of this tip written specifically for later versions of Word, click here: Wrapping Spaces.

Let's face it: some people like one space at the end of a sentence, and other people like two. (And some one-space people love to bash two-space people, and vice-versa—but that's another story.) Fortunately, Word is not a program that enforces a single space after sentences when you may want to use two. On the other hand, if the end of your sentence falls at the end of a line, one of your spaces may stay on the first line, and the second space may wrap to the second line. This can mess up the appearance of your page.

The first thing to do is to ensure that the extra space is really wrapping to the next line. If you have non-printing characters turned off (so they are not visible), it is very easy to mess up the formatting of a document. For instance, you may think you have two spaces at the end of a line, but you really have a single space, followed by a hard return, and then the new line starts out with a space. To check for this, just click on the Show/Hide tool on the toolbar (it looks like a backwards P) and see if a hard return is at the end of the line.

If there are no formatting problems, then you could obviously delete the extra space. However, there is one compatibility setting that could be causing a problem. Follow these steps: 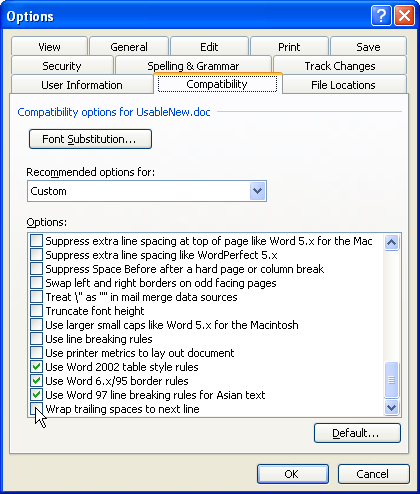 Figure 1. The Compatibility tab of the Options dialog box.

In normal operations with Word, this setting should not become set. However, some users have noticed that it can become set when importing documents from another Word processor, such as WordPerfect. In either case, make sure the option is cleared, and the problem of the wrapping spaces should go away.

WordTips is your source for cost-effective Microsoft Word training. (Microsoft Word is the most popular word processing software in the world.) This tip (656) applies to Microsoft Word 97, 2000, 2002, and 2003. You can find a version of this tip for the ribbon interface of Word (Word 2007 and later) here: Wrapping Spaces.

Counting Cells According to Case

Text placed in cells can either be lowercase, uppercase, or a mixture of the two. If you want to count the cells based ...

Permanent Watermarks in a Document

Need to add a graphic watermark to a document? It's not that hard to do but making the watermark permanent can be a bit ...

Adding hyphens to your document can affect the way in which Word wraps text from one line to the next. Optional hyphens, ...

Entering a Page Break from the Keyboard

Need to force Word to move text to the top of the next page? It's easy when you use the keyboard shortcut for a page break.

Do you want Word to always capitalize the first letter appearing after a colon? The program won't do it by default, but ...

Thank you. Not knowing how to handle this problem made me switch to using one space at end of sentences. But some clients demand two, so here's my question: If you edit a document that has been created with "wrap trailing spaces" deselected, will those spaces reappear if the sentence in the edited version no longer ends at the end of a line? In other words, are those trailing spaces actually deleted or just held back?