Please Note: This article is written for users of the following Microsoft Word versions: 97, 2000, 2002, and 2003. If you are using a later version (Word 2007 or later), this tip may not work for you. For a version of this tip written specifically for later versions of Word, click here: AutoFormatting a Document.

Word includes a feature that formats what you type, as you type it. You probably take many of these automatic formatting (AutoFormat) adjustments for granted. Word does things like changing your quotes to Smart Quotes, automatically creating bulleted and numbered lists, and changing the indentation of paragraphs.

This is fine and good for many people, but what if you get a document from someone else and it needs a lot of the "little touches" applied to it? This is where the real industrial-strength AutoFormat feature of Word comes into play. You see, AutoFormat doesn't just work as you type—it also is available, on demand, to format an entire document. Here's how to AutoFormat your document: 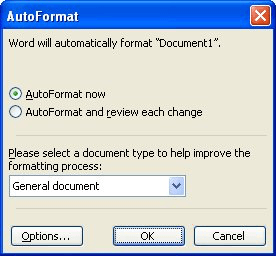 At this point, AutoFormat works its magic and your document is "reformatted" to appear as it would have if you had typed it yourself.

You should understand that it is very unlikely that AutoFormat will do all the formatting you need done. Each document is different, and you should make sure you examine the document after AutoFormat is completed to see if there are any other formatting tasks you need to complete.

WordTips is your source for cost-effective Microsoft Word training. (Microsoft Word is the most popular word processing software in the world.) This tip (638) applies to Microsoft Word 97, 2000, 2002, and 2003. You can find a version of this tip for the ribbon interface of Word (Word 2007 and later) here: AutoFormatting a Document.

Users of WordPerfect know what parallel columns are. There is no such capability in Word, but there are ways you can ...

Displaying a Number as Years and Months

Fields can be very helpful for including dynamic information in your documents, such as cross-references. It can be ...

Want to print your document only on odd-numbered pages in a printout? There are a couple of things you can try, as ...

Edits Cause Text to Switch to Odd Fonts

If you have problems with strange fonts showing up when you paste information into a document, it is helpful to ...

Some types of documents rely upon margin notes to the left or right of your main text. Getting these to appear in Word ...

Okay, apologies! I AM a big dummy! Just saw the note at the top and looked at the article "written specifically for later versions of Word" - works great.

I'm sure I'm just being a big dummy, but I can't find the Format menu in Word 365. So sorry, Allen, but would you please direct me there?

The best in europe

Using WORD 2003.
I Load the documentI want to format.
All lines in a paragraph are shorter than the ruler.

Nothing happens. Tried marking a paragraph first. no help.