Please Note: This article is written for users of the following Microsoft Word versions: 97, 2000, 2002, and 2003. If you are using a later version (Word 2007 or later), this tip may not work for you. For a version of this tip written specifically for later versions of Word, click here: Unwanted Graph Paper Effect.

Trevor noted that two of the systems at his office just recently exhibited the same strange behavior. When they start a new session with Word, it opens up with a "graph paper" effect on the screen. He wonders why this would this happen, and how they can turn it off.

There are a couple of possible reasons why this has occurred. The most likely reason is that the drawing grid has been turned on. Follow these steps to turn it off: 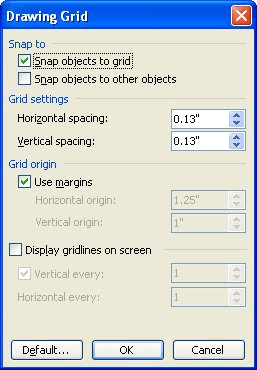 If the graph paper effect is still visible, get out of Word and use Windows' tools to find the Normal.dot file. Rename it to something else (such as OldNormal.dot) and then restart Word. If the problem goes away, then you know that it is due to some setting stored in your Normal.dot file. This can help you to track down the culprit, or you could simply let Word rebuild a new Normal.dot template file for you.

Finally, it could be that you have some third-party add-on installed that is causing the effect. Check your add-ons and if you see any there, turn them off and restart Word.

WordTips is your source for cost-effective Microsoft Word training. (Microsoft Word is the most popular word processing software in the world.) This tip (524) applies to Microsoft Word 97, 2000, 2002, and 2003. You can find a version of this tip for the ribbon interface of Word (Word 2007 and later) here: Unwanted Graph Paper Effect.

Teachers often grade on what is affectionately referred to as "the curve." The problem is, it can be a bit difficult to ...

Want to move a row in a table very easily? You can do so by using the same editing techniques you are already using.

Each table in a document can have different numbers of columns and different widths for columns. If you want to join two ...

Need to know what the different codes are that you can use with the Alt key, along with the characters resulting from ...

Program Opens without the Desired Document

Double-click a document link in the recent documents list maintained by Windows, and you may be surprised if Word doesn't ...

How to display the variety of toolbars in Word.

Great tip, except... where is the "drawing toolbar"?