Please Note: This article is written for users of the following Microsoft Word versions: 97, 2000, 2002, and 2003. If you are using a later version (Word 2007 or later), this tip may not work for you. For a version of this tip written specifically for later versions of Word, click here: Associating a Name with a Position.

Associating a Name with a Position

Melissa has a document that includes, sprinkled throughout the text, various job titles from her company. She would like to somehow associate a person's name with each job title. For instance, if someone hovers the mouse pointer over a particular job title (such as "Project Manager") Word would show a ToolTip that showed the person's name (such as "John Smith").

There is no way to do this automatically. You can, however, simulate what you want by using bookmarks and hyperlinks in the document. Follow these steps: 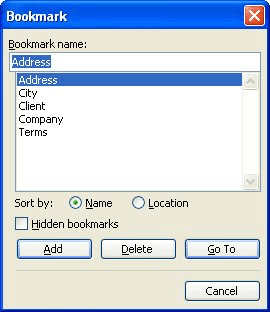 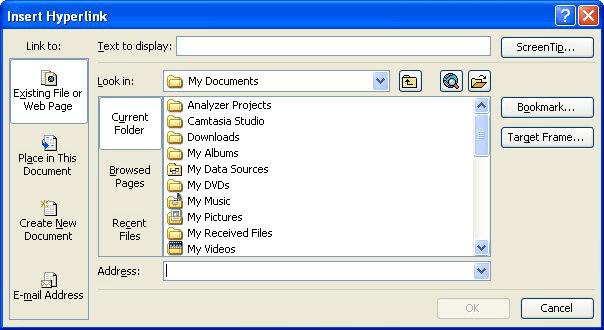 What you end up with is a hyperlink for the individual. If someone moves the mouse cursor over the phrase, they will see a screen tip (or, what is sometimes called a ToolTip) that shows the name of the person in that position. They drawback is that besides the screen tip, you'll also see a prompt such as "Ctrl+Click to Follow." (This is a hyperlink, after all.) If the person does what the prompt says, they aren't really taken anywhere because the target of the hyperlink is the same phrase that you turned into a hyperlink.

You'll need to follow these steps for every occurrence of a company position within the document which, depending on your needs, could be rather labor intensive. You could also simply copy the first hyperlinked instance of the company position (use Ctrl+C) and then use Find and Replace to search for other instances and replace them with the hyperlink. Just use ^c in the Replace With field, which replaces the position phrase with the hyperlink.

WordTips is your source for cost-effective Microsoft Word training. (Microsoft Word is the most popular word processing software in the world.) This tip (10412) applies to Microsoft Word 97, 2000, 2002, and 2003. You can find a version of this tip for the ribbon interface of Word (Word 2007 and later) here: Associating a Name with a Position.

If you need to often delete duplicate items from a list, then you'll love the macro presented in this tip. It makes quick ...

When using Track Changes, you may want to have your edits appear to be those of a different user. Here's how to fool Word ...

When Word checks the spelling of a document, it can either check or ignore words that are in uppercase letters. Here's ...

Creating a Hyperlink that Opens the Linked Object

Hyperlinks can be very helpful for loading and displaying external resources. But they are less useful for opening and ...

ScreenTips can be a helpful feature in some documents, but adding them also means you need to add a hyperlink. Here's a ...

Word allows you to embed active hyperlinks in your documents. If you later want to change or edit that hyperlink, you can ...