Please Note: This article is written for users of the following Microsoft Word versions: 97, 2000, 2002, and 2003. If you are using a later version (Word 2007 or later), this tip may not work for you. For a version of this tip written specifically for later versions of Word, click here: Ignoring Punctuation in Names.

Many companies these days are coming out with product names that include some sort of punctuation. We are all familiar with Yahoo! and how they added the exclamation mark (as a formal part of the company name), probably to denote excitement. Many other companies are doing the same thing. This is all fine and good from a marketing standpoint, but it can cause misery when you are trying to do a spelling and grammar check in Word.

Believe it or not, there is a solution (besides changing the product name). The core part of the solution is to replace the exclamation mark with a symbol. That way, the grammar checker will ignore it when doing punctuation checks. Do the following: 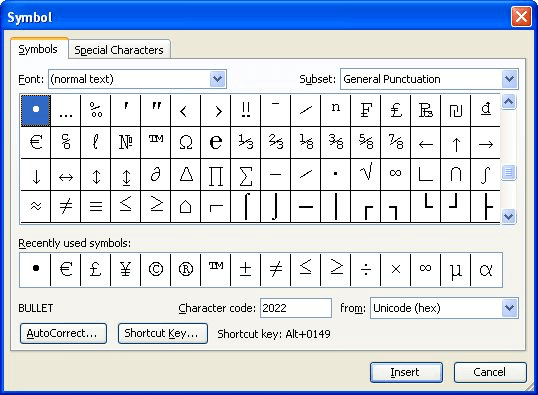 It also means that, if AutoCorrect As You Type is on and Word normally auto-corrects first letter capitalization for sentences, it will ignore the symbol version of the exclamation mark and not auto-correct where it's not required. In other words, the first word after the product name won't be automatically capitalized as you type.

The only remaining problem is that going through the Insert Symbol route is a bit too much like hard work. What would be better is to type the product name using the normal exclamation mark but have it automatically change itself to use the symbol version. Assuming the product name has been typed and the symbol exclamation mark added as above, then follow these steps: 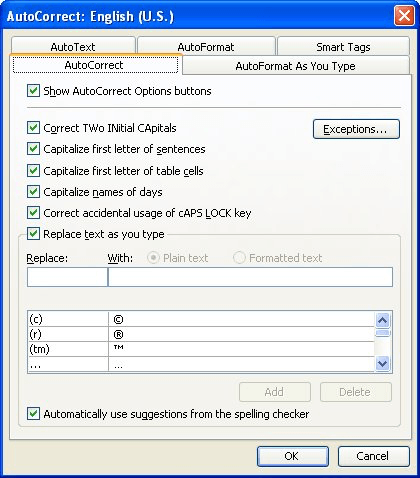 WordTips is your source for cost-effective Microsoft Word training. (Microsoft Word is the most popular word processing software in the world.) This tip (1834) applies to Microsoft Word 97, 2000, 2002, and 2003. You can find a version of this tip for the ribbon interface of Word (Word 2007 and later) here: Ignoring Punctuation in Names.

ScreenTips are those small, yellow boxes that appear when you hover over different objects in Word. You have complete ...

Ever wonder how to add a curved line to your document? With a little practice, adding curves is simple. Here's how.

Do you need to total all the cells that are a particular color, such as yellow? This tip looks at three different ways ...

Word can perform several different types of mail merge operations, and the type you choose can affect how you are able to ...

Do you need to compare two versions of a document to each other? Word provides a tool that can make this easy, as ...

Mail merge can be used to put together groups of documents that rely on common information. This tip shows how mail merge ...