Please Note: This article is written for users of the following Microsoft Word versions: 97, 2000, 2002, and 2003. If you are using a later version (Word 2007 or later), this tip may not work for you. For a version of this tip written specifically for later versions of Word, click here: Replacing Two Tabs with a Space in Limited Situations.

Replacing Two Tabs with a Space in Limited Situations

Terry often imports information, such as customer names, into Word from a different program. The problem is that the names are in the format (John^t^tDoe), where the first and last names are separated by two tabs and the entire name is surround by parentheses. Terry needs to replace the two tabs with a single space. He knows he could use a regular Find and Replace to do it, but it would affect all other instances of two tabs in the document. He wonders if there is a way to search for the parentheses, a word, and two tabs and replace it with the parentheses, the word, and a single space.

This can actually be done using the regular Find and Replace feature of Word. First, if the names are all within a single portion of your document, you could select the paragraphs that contain the names and do a simple Find and Replace to change the two tab characters to a single space. This would limit the replacements to just what you selected and avoid making changes in other parts of the document where there may be double tab characters used in a different context.

If this cannot be done (perhaps the names aren't limited to a single area of the document), then you can still use Find and Replace. All you need to do is do what is called a wild card search, which opens up the real power being Find and Replace. Follow these steps: 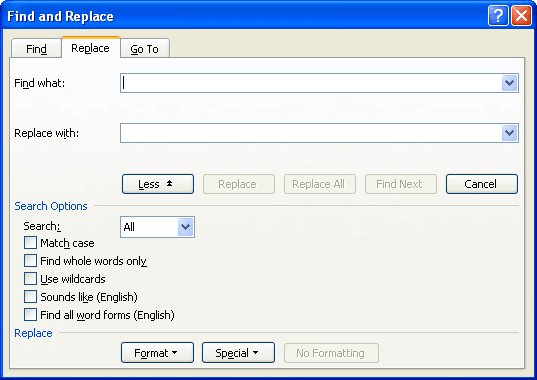 The key to understanding what is happening with these steps is understanding the search pattern created in step 4. It is easiest to break it down into parts, with each part surrounded (in the pattern) by parentheses. The first part is this:

The next part of the pattern is this:

This part says "find two tab characters". This is fairly self-explanatory. Because this part follows the first part, just discussed, it means that the two tabs must follow the first name, as already mentioned. The third part of the pattern is this:

You should be aware that you might need to modify what you search for, depending on the characteristics of the names in your document. As shown here, the search works great, provided that the names (first and last) begin with a single uppercase letter and have no other characters in them, such as spaces or periods. If your names aren't structured in this way, you can modify the search pattern to be less restrictive. For example, consider the following search pattern which could be used in step 4:

WordTips is your source for cost-effective Microsoft Word training. (Microsoft Word is the most popular word processing software in the world.) This tip (908) applies to Microsoft Word 97, 2000, 2002, and 2003. You can find a version of this tip for the ribbon interface of Word (Word 2007 and later) here: Replacing Two Tabs with a Space in Limited Situations.

The VLOOKUP function is very powerful, but it will only return values that meet a very limited set of criteria. If you ...

Getting Rid of Many Hyperlinks

Got a bunch of hyperlinks you need to get rid of? Here's a handy (and simple) macro that can do the task for you.

Styles are a great boon for applying styles in a powerfully consistent manner. How Word applies styles, however, depends ...

If you do a spelling check and notice that Word doesn't catch a word that you know is misspelled, it is easy to get ...

Having problems making spell check work on a portion of your document? There are two primary causes for such an ...

How can I find and replace all "Mcdonald, Mcandrew, mcghee etc with McDonald, McAndrew etc using wildcards? I can write the find part as (Mc)(a-z]{1}) but how do I specify that the replace part should be 12<uppercase>? (Needless to say, <uppercase> doesn't work!)
Thanks for your help!
Sandy

Oops.
One too many parentheses in my first example of what doesn't work.
That invalid expression should have been:
(([A-Z][a-z]{1,}){1,})

Notes:
I tried using nested parentheses to include one or more sets of initial uppercase letters so as to find both Donald and McDonald, or JoeBillyBob. But Word does not accept nested parentheses. So, this is no good:
(([A-Z][a-z]{1,}){1,}))

Further, I cannot use a zero-or-more instance wildcard for potentially hyphenated names to find both Smith and Hamilton-Smith because Word does not accept such regular expressions. This is also no good:
-{0,}

Some programming languages do accept this expression.

For these and other complex cases, the less restrictive example in this WordTips column does work.
((*)(^t^t)(*))