For simplicity, suppose you have the following macros, many of which have appeared in other issues of WordTips: AddParens, AddQuotes, EmailCleanup, and TwoSpaces. Make sure that the template containing your macros is loaded into Word, and then create a Macros menu, as follows. 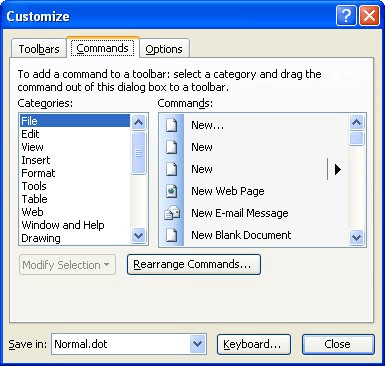 Figure 1. The Commands tab of the Customize dialog box

You now have a Macros menu, and you could end your customizations. It won't do you much good, however, because your Macros menu, while available on the menu bar, is empty. To put the macros mentioned above on the menu, do the following with the Customize dialog box still visible:

Now you have several benefits. By typing Alt+M, the Macros menu opens. At that point, you can look to see the name of any macro and the letter that will activate it. The letter after the ampersand (step 3, above) is underlined and activates the macro. You also have the option of using the arrow keys to select a menu option, or clicking on the menu option as you would with any other menu.

WordTips is your source for cost-effective Microsoft Word training. (Microsoft Word is the most popular word processing software in the world.) This tip (812) applies to Microsoft Word 97, 2000, 2002, and 2003.

Simulating Alt+Enter in a Formula

You can use the Alt+Enter keyboard shortcut while entering information in order to force your data onto multiple lines in ...

Some symbols can be easily changed in Excel or in Windows, such as the symbols used for currency and to separate ...

You've turned on Highlight Changes, but how do you know what has been changed? This tip explains how Excel displays those ...

Adding Your Own Menu Items

You can customize Word to your heart's content. One way to customize the program is by adding options to the Word menus. ...

Word is quite versatile in how you can customize it. You can add all sorts of macros to menus, but doing so may cause ...

The Case of the Vanished Menu Bar

Can't find your menu bar any more? Here are some things you can try to get that important feature back on your screen ...