Please Note: This article is written for users of the following Microsoft Word versions: 97, 2000, 2002, and 2003. If you are using a later version (Word 2007 or later), this tip may not work for you. For a version of this tip written specifically for later versions of Word, click here: Avoiding the Update Links Message.

Michael notes that, as he expects, Word automatically updates links when he open a document. The problem is that when other users of his workbook see the "Do you want to update links" message that appears at startup, they don't understand what is happening. Michael wonders if there is a way to either suppress the message or set the default to "Yes" (to update links) so that the message never appears.

The answer is "yes" and "sort of." (Sounds confusing, right?) You can set the default to yes, but that doesn't guarantee that the users won't be asked again about updates.

If you want to set the default to yes, so that the links will be updated automatically on your machine, you can follow these steps: 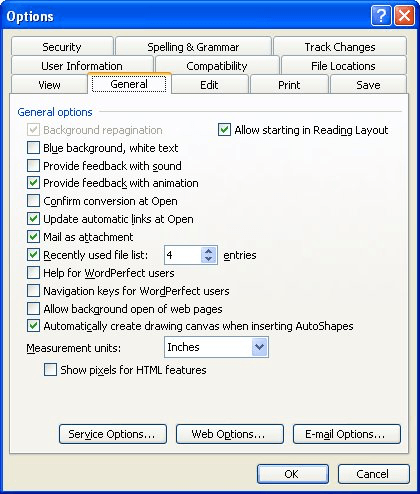 With this setting established, your default is established—you want links updated when the document is opened. The problem, of course, is that this is a per-machine setting. As long as someone is using your machine, there is no problem. If you give the document (or series of documents, since there are links between them) to someone else who doesn't have the setting made, then their links won't be updated automatically.

There is one way around this, and that is with an AutoOpen macro. A simple one, to change the one setting, could appear as follows:

Of course, such an approach simply replaces one problem with another problem. If your users are confused by being asked about links, then there is just as great a chance that they will be confused when asked if macros should be enabled in the document they are opening.

There is another huge caveat in this whole mess. Even though the default for updating links is set to yes, the user could still see a dialog box asking if the links should be updated. This behavior apparently depends on what version of Word is being used or what version of service pack the user has installed. For instance, if the user has Word 2002 SP2, Word 2000 SR1, or Word 97 SP2, then even though the default setting for updating links is yes, the user is still asked if the update needs to occur. This change apparently affects later versions of Word, as well, and was made for security purposes. You can read about it here:

You'll notice that if you read the Microsoft Knowledge Base article, there is a Registry change you can make to get around this behavior. The upshot of this, of course, is that the change affects only a single machine—if you are looking for a way to put the mind of novice users as ease, you aren't going to do it by suggesting that they make Registry edits.

WordTips is your source for cost-effective Microsoft Word training. (Microsoft Word is the most popular word processing software in the world.) This tip (573) applies to Microsoft Word 97, 2000, 2002, and 2003. You can find a version of this tip for the ribbon interface of Word (Word 2007 and later) here: Avoiding the Update Links Message.

Summing Digits in a Value

Want to add up all the digits in a given value? It's a bit trickier than it may at first seem.

Excel provides a handy worksheet function that allows you to forecast values based upon a set of known values. This ...

When working with finances, you often need to know the rate of return on a given investment. The most common type of ...

Word allows you to save your documents in a variety of different formats. You can specify the format when you actually ...

Got a bunch of text that you've imported from a text file? Need to make it look better? You can take a stab at it with ...

Opening Multiple Documents at Once

Word's Open dialog box provides many of the same file management functions as Windows Explorer does. One of the functions ...