Please Note: This article is written for users of the following Microsoft Word versions: 97, 2000, 2002, and 2003. If you are using a later version (Word 2007 or later), this tip may not work for you. For a version of this tip written specifically for later versions of Word, click here: Turning Off HTML Conversions.

Word includes a feature that allows you to open HTML documents and have them appear on your screen as formatted text. For some people this is great, while others see it as a big bother. If you don't want your HTML documents formatted by Word, but instead want them opened as straight text, you have two general ways you can do this.

The other way is less drastic, but can be just as helpful. Follow these steps: 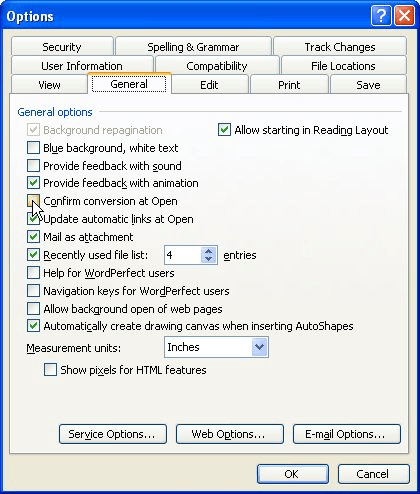 Now, whenever you open a document with an HTML (or HTM) extension, Word displays the Convert File dialog box. Here you are being asked how you want Word to treat the file you are opening. The HTML Document option is selected, since Word detected the file contained HTML code. You can select the Text Only option, and then Word will treat the file as plain text, without doing any formatting.

You should note that the procedure just described only works if you use the Open dialog box to open your file. If you later use the MRU file list to open the file, or the Documents list from Windows, then Word doesn't ask you how it should do the file conversion—it straightaway opens the file as a formatted HTML document. If you do quite a bit of this type of file opening, then your best option is to remove the HTML file filter as first described in this tip.

WordTips is your source for cost-effective Microsoft Word training. (Microsoft Word is the most popular word processing software in the world.) This tip (5413) applies to Microsoft Word 97, 2000, 2002, and 2003. You can find a version of this tip for the ribbon interface of Word (Word 2007 and later) here: Turning Off HTML Conversions.

When working with data in a macro, there are two broad categories you can manipulate: numbers and text. Sometimes you ...

When configuring Word so that it matches your preference in shortcut keys, you need to be careful about what shortcut ...

WordPerfect users are familiar with the F4 command, which indents and justifies a paragraph. Word does not have an ...

Saving Personalized Copies of a Document

Need a series of documents that include an individual's name or a company name? Here's a handy little macro that will ...

WordPerfect included a command that allowed users to save a copy of their current document to the A: drive. Word has no ...

Want an easy way to move between directories using the Open dialog box? With just a little bit of up-front typing, you ...