Please Note: This article is written for users of the following Microsoft Word versions: 97, 2000, 2002, and 2003. If you are using a later version (Word 2007 or later), this tip may not work for you. For a version of this tip written specifically for later versions of Word, click here: Inserting Foreign Characters.

If English is your native language, you may periodically have a need to type something that contains a character that doesn't appear in the English alphabet. For instance, words that are of French descent (such as resume) may require an accent over some of the vowels to be technically correct.

There are multiple ways to insert foreign characters. One way is to choose Symbol from the Insert menu, and then look for the character you need. While this approach is possible, it can quickly become tedious if you use quite a few special characters in your writing.

Another possible approach is to use the AutoCorrect feature of Word. This works great for some words, and not so great for others. For instance, you wouldn't want to set up AutoCorrect to convert all instances of resume to resume, since both variations are words in their own right. You can use it for other words that do not have a similar spelling in English. In fact, Microsoft has already included several such words in AutoCorrect—for instance, if you type souffle you get souffle or if you type touche you get touche.

Word does include a set of handy shortcuts for creating foreign characters. Essentially, the shortcut consists of holding down the Ctrl key and pressing the accent mark that appears as part of the foreign character, and then pressing the character that appears under the accent mark. For instance, to create the e in resume, you would type Ctrl+' (an apostrophe) and then type the e. There are a number of these shortcuts, as shown here:

Note that not all shortcuts hold to the general rule outlined earlier, and some accent character designators are approximations. (For instance, using Ctrl+: results in the next character having an umlaut, as in u, even though the colon is not the actual accent character used.)

If you ever forget the shortcut combination for a particular foreign character, you can use the Symbol dialog box to help you out. For instance, let's assume that you forget how to create n, as in Canon City, a lovely town in Colorado that is home to the amazing Royal Gorge Bridge. You could follow these steps: 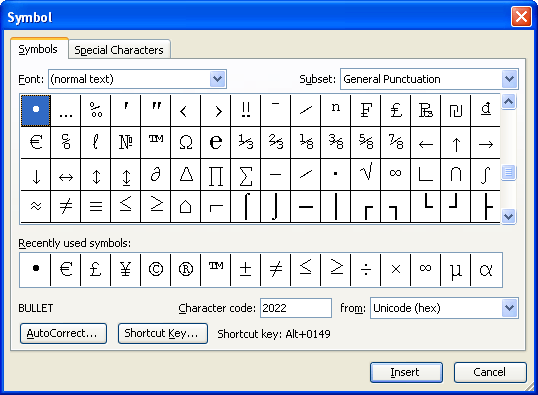 You can use this technique to figure out the shortcut for any of the foreign-language characters.

Another method for inserting foreign characters is to just remember their ANSI codes, and then enter them by holding down the Alt key as you type the code on the numeric keypad. For instance, you can enter the e in resume by holding down Alt and entering 0233 on the keypad. When the Alt key is released, the specified character appears. Interestingly enough, you can find out what the ANSI values are by using the Character Map accessory in Windows. While it functions very similarly to the Symbol dialog box in Word, the shortcuts shown all rely on the Alt-keypad technique.

Additional information on inserting special characters (including foreign characters) can be found in Word's online help system and at the Word MVP site:

WordTips is your source for cost-effective Microsoft Word training. (Microsoft Word is the most popular word processing software in the world.) This tip (1680) applies to Microsoft Word 97, 2000, 2002, and 2003. You can find a version of this tip for the ribbon interface of Word (Word 2007 and later) here: Inserting Foreign Characters.

Using the Mouse to Adjust Your View of 3-D Graphs

Want to adjust the perspective from which your 3-D graph is viewed? Excel allows you to use the mouse to rotate the graph ...

Getting Rid of Custom Toolbars

If you start Word and get a bunch of unwanted toolbars displayed on the screen, you can be scratching your head (or ...

One of the most esoteric shortcuts available in Word is one that allows you to move table rows, either within a table or ...

The vast majority of what you enter into a document can be accomplished through the use of the regular keyboard. However, ...

Word can check to see if you have a consistent number of spaces at the end of your sentences.

Want to delete the current page? There is no automatic command to perform this task in Word, but you can create your own ...

By the way, I tried to add a comment earlier but it rejected the comment. It says "thanks for trying to add a comment to this Tips.Net article. The following errors occurred: Invalid security question answer.

The security question: "What is seven minus 4?" My invalid answer: "three or 3." I had no idea, and still have no idea, whether you want "three" or "3" as an answer. And my comment was deleted, so I have to start again. This time, I'll make a copy of it.

The comment was about special French characters in Word. I am using a MIni Mac, with the latest version of Word, with an ergonomic (therefore not an Apple) keyboard. There was no "U.S. International " choice. How do I double-check for that?

Using the symbols is not only tedious but it doesn't work, since I need my special characters to be in the same font as the rest of the text. Please advise! (Okay, trying with "3" this time.) . (I see now it also deleted my name, email, and notification preference. I guess I committed a real sin by typing "three" or "3"!)

Your shortcuts works in Word 2016 too

Perhaps this is a version problem...

Several of the hot key combinations above are not complete in my version of MS Word (Office Pro Plus 2013, v 15.0.4701.1002). Specifically, the "Shift" key is missing from the combinations for umlaut, tilde, and circumflex.

The shortcuts described in this tip only work if you have previously set the keyboard to United States-International. In the case of upside-down question and exclamation marks, the ALT to be pressed is the one at the right of the keyboard. Left ALT is not responsive. I use the procedure all the time, I am a professional translator.

Just remember that a word with proper foreign diacriticals won't be found in a search for the original English form without the diacriticals.