Please Note: This article is written for users of the following Microsoft Word versions: 97, 2000, 2002, and 2003. If you are using a later version (Word 2007 or later), this tip may not work for you. For a version of this tip written specifically for later versions of Word, click here: Displaying Nonprinting Characters. 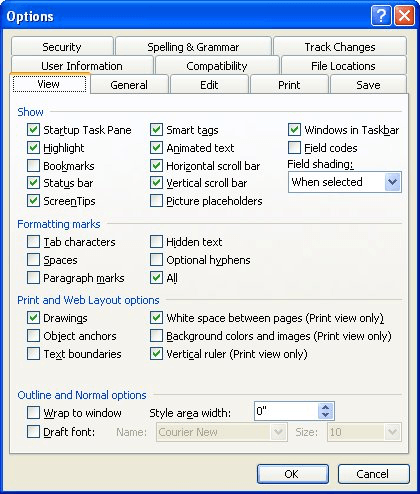 Why would you want to display these characters? Quite simply because it is much easier to understand spacing when the characters are displayed. You can quickly tell, for instance, when you have inserted two spaces between words or added an extra carriage return. This allows you to more accurately control the look of your document and what it contains.

WordTips is your source for cost-effective Microsoft Word training. (Microsoft Word is the most popular word processing software in the world.) This tip (1048) applies to Microsoft Word 97, 2000, 2002, and 2003. You can find a version of this tip for the ribbon interface of Word (Word 2007 and later) here: Displaying Nonprinting Characters.

When you print address labels, you only have a limited amount of horizontal space for each line of the label. If your ...

Need to know how to generate a full month name based on a date? It's easy to do, as discussed in this tip.

Word allows you to specify which rows in a table should be considered headings. What if setting the headings doesn't work ...

Word can check to see if you have a consistent number of spaces at the end of your sentences.

One of the most common symbols that can be added to a document is the copyright mark. This tip examines several ways you ...

I find it much easier to use the show/hide icon that I show in my toolbar. If you edit documents a lot it is worth the time to put this icon in your toolbar that is always on display.