Martyn has a large collection of macros that he has built up over the course of several years. Each of these macros has been added to two lengthy custom menus. Recently, if Martyn edits any of the macros and then saves the template, the next time he starts Word all the entries in the custom menus are gone. The only remedy seems to be to restore the most recent backup of Normal.dot and, as a consequence, lose his editing.

The best solution is to move the macros out of the Normal.dot template and into a different template. That way, any corruption in Normal.dot will not affect your macros because they are no longer in that template.

For instance, let's say you move the macros to a template called MyMacros.dot. You could then move the template file to Word's Startup folder, where it will be recognized and loaded as a global template the next time you start Word. This means that all the macros within the template are now available at all times, just as they were when they were in the Normal.dot template.

Of course, when you move your macros to a new template (normally using the Organizer or moving them within the VBA Editor itself), this can "break" the menus you created. The reason for this is that the menus--and any custom toolbar buttons--point to the ProjectName.ModuleName.MacroName. When you move the macro to a different template, you are changing the ProjectName and possibly the ModuleName and MacroName.

Your options at this point are to recreate the menus, but if you have dozens (or scores) of macros added to the menus, this can be a real pain. You could, instead, try these general steps, prior to moving the macros, if you are using a version of Word prior to Word 2007: 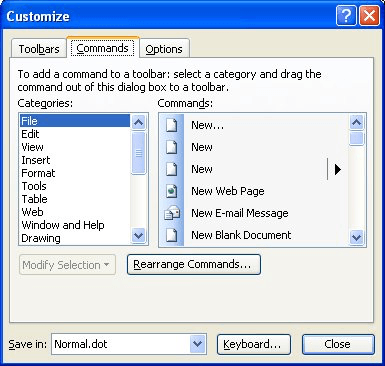 Figure 2. The Commands tab of the Customize dialog box.

Unlike your original menus, these newly created menus (on the new toolbar) can be copied and saved to a brand new template. Use the Organizer to copy the new toolbars and your macro modules to a new template. This template can be placed in the Word Startup folder, as described earlier.

WordTips is your source for cost-effective Microsoft Word training. (Microsoft Word is the most popular word processing software in the world.) This tip (431) applies to Microsoft Word 97, 2000, 2002, and 2003.

Getting Rid of 'Mail To:' in E-mail Links

If you convert e-mail addresses to hyperlinks, you could end up with some 'mailto:' verbiage at the beginning of the ...

Creating a String in a Macro

Need to put together a bunch of characters to create a text string? You can do it in your macros by using the String ...

Selecting Individual Cells in a Table

Many times, before applying formatting or doing another operation, you need to select an individual cell in a table. ...

What do you do if, one day, one of your Word menus suddenly stops working and actually crashes the program? Here's the ...

Want to get at your macros quickly? One way is to create a Macros menu to make your most common macros immediately available.

It can be disconcerting when a custom menu you've used for years suddenly loses all the options it previously contained. ...