Please Note: This article is written for users of the following Microsoft Word versions: 97, 2000, 2002, and 2003. If you are using a later version (Word 2007 or later), this tip may not work for you. For a version of this tip written specifically for later versions of Word, click here: Changing Characters on Keyboard Keys.

Word provides a couple of tools that may be helpful. For instance, the AutoCorrect feature is used to automatically change something you typed into something you should have typed. (In other words, it automatically corrects what you type.) You could, if desired, create an AutoCorrect entry that will change the brace characters into the desired characters. The problem is that AutoCorrect is only triggered if you press a space after the thing that needs to be changed. Thus, if you had an AutoCorrect entry that changed the left brace to a section mark, then it would only be triggered if you pressed the left brace followed by a space. If you wanted the section mark followed immediately by a number, then typing {17 would not result in a correction to the desired section mark—Word would leave it unchanged.

The other tool that would be more helpful in this instance is the ability to assign shortcut keys to special characters. Follow these steps: 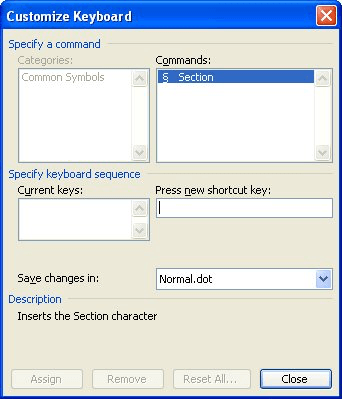 Now you can use the shortcut keys you created in order to insert the desired symbols. Of course, if you didn't want to create the special shortcut keys (perhaps they are already assigned to some other purpose on your system), you can always enter the symbols by holding down the Alt key and pressing 20 (pilcrow) or 21 (section mark) on the numeric keypad.

Outside of Word there are any number of keyboard remapping utilities you can install on your system. Some are free and cost money. Even Microsoft has one call the Microsoft Keyboard Layout Creator, which you can find here:

Third-party programs in this category abound; here are a few:

You can locate a plethora of other such utilities if you do a search for the phrase "remap keyboard" or "map keyboard".

WordTips is your source for cost-effective Microsoft Word training. (Microsoft Word is the most popular word processing software in the world.) This tip (10303) applies to Microsoft Word 97, 2000, 2002, and 2003. You can find a version of this tip for the ribbon interface of Word (Word 2007 and later) here: Changing Characters on Keyboard Keys.

Formatting a cell could, if you desire, also include the indentation of information within the cell. This tip examines ...

Referencing the Last Six Items in a Formula

If you have a list of data in a column, you may want to determine an average of whatever the last few items are in the ...

Enter a fraction into Excel, and you may be surprised that the program reduces the faction to its simplest form. If you ...

Applying Bullets from the Keyboard

Most people use the toolbars to apply bullets to paragraphs. If you want to apply them using the keyboard, then you can ...

Need to get rid of a keyboard shortcut key you previously defined? It's easy to do if you follow these steps.

The Insert key can be used for different purposes, depending on how you configure the program. This tip explains those ...