Please Note: This article is written for users of the following Microsoft Word versions: 97, 2000, 2002, and 2003. If you are using a later version (Word 2007 or later), this tip may not work for you. For a version of this tip written specifically for later versions of Word, click here: Highlighting Information Using Shading.

Word provides a way you can shade the information in your document. This shading can be added in conjunction with any border you may specify for the paragraph. Word allows you to precisely control the degree of shading, as well. To add shading to a paragraph, follow these steps: 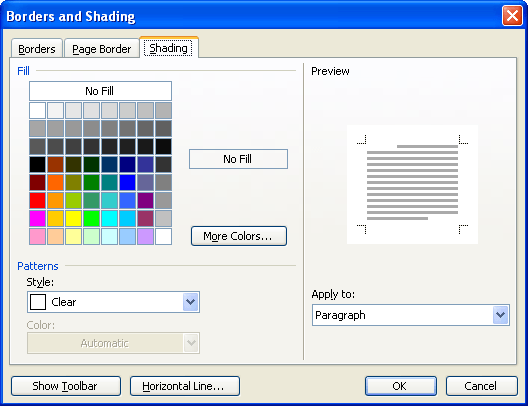 Figure 1. The Shading tab of the Borders and Shading dialog box.

WordTips is your source for cost-effective Microsoft Word training. (Microsoft Word is the most popular word processing software in the world.) This tip (1529) applies to Microsoft Word 97, 2000, 2002, and 2003. You can find a version of this tip for the ribbon interface of Word (Word 2007 and later) here: Highlighting Information Using Shading.

Selecting Fonts for a Chart

Microsoft Chart uses text to label items in a chart. Here's how to change the font used for that text.

Cells that affect another cell are called precedent cells. If you need to know which cells affect a particular cell, ...

The Changing Relationship of WordArt and Text Boxes

Two of the long-time features in Word are text boxes and WordArt. You might not think these two are related, but they are ...

Setting the Distance between Text and Borders

Add a border around a piece of text (such as a paragraph), and Word makes some assumptions about the placement of that ...

Got a document that has a border around some paragraphs? Here's how you can get rid of the border in the fastest way ...

Have you ever had a line appear on your document that you can't seem to get rid of? It could be due to a built-in ...

Dear Sir,
How can I find the Format menu and then Borders and Shading command in Word 2000? I can not see Format Menu in Word 2000.
- Srijan

Wow! It was that easy! I spent a lot of time trying to use the wrong approach to get rid of shading I cut and pasted along with a list on a web page. This one simple tip on how TO shade a paragraph was the simple way to undo the shading I was trying to get rid of. Mr. Wyatt has my respect!