Please Note: This article is written for users of the following Microsoft Word versions: 97, 2000, 2002, and 2003. If you are using a later version (Word 2007 or later), this tip may not work for you. For a version of this tip written specifically for later versions of Word, click here: Understanding Object Anchors.

Objects can be placed in your document in two ways: either inline or floating. Inline objects are those that reside on the same layer as your text and are positioned within the stream of text that surrounds the object. Floating objects are those that are placed on a layer over the text. The thing that indicates essentially where a floating object is located in relation to the text in your document is referred to as an object anchor.

Object anchors can only be seen in Print Layout view, but even then they are not always visible. In other words, you can control the display of the anchors. If you select a graphic object in your document and you see a boat-anchor icon appear in the left margin of the document, then you know you have the display of object anchors enabled. You can change this setting by following these steps: 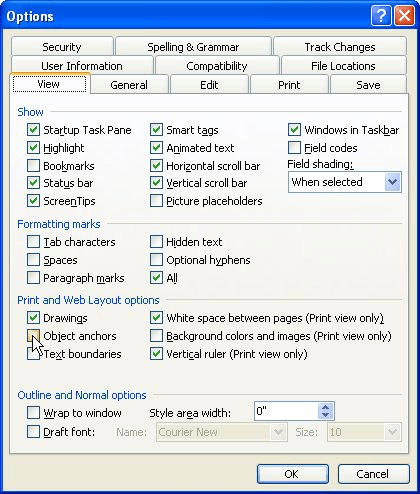 Object anchors are used to specify the paragraph with which an object is associated. Why is that important? Because it can affect the positioning of the object within the document. For instance, if you select a picture and then choose Picture from the Format menu, you will see the Format Picture dialog box. The Position tab of that dialog box allows you to set the vertical position of the picture in relation to the paragraph to which it is anchored. Thus, seeing the object anchor helps you to understand the positioning of the picture.

WordTips is your source for cost-effective Microsoft Word training. (Microsoft Word is the most popular word processing software in the world.) This tip (1439) applies to Microsoft Word 97, 2000, 2002, and 2003. You can find a version of this tip for the ribbon interface of Word (Word 2007 and later) here: Understanding Object Anchors.

Copying Between Instances of Excel

Opening a Workbook to a Specific Worksheet

When you open a workbook, Excel displays the worksheet that was visible when the workbook was last saved. You may want, ...

Technique for Adding a Text Box to an Envelope

Text boxes can be a great design feature to use in laying out a document. You may want to add one to an envelope, ...

Selecting a Graphic Behind a Text Box

How to select a graphic that is obscured by a text box can be perplexing. Here's an overview of the different ways you ...

Lines can help to organize the data on a page or make certain points clearer. Word provides several different ways you ...

Stopping Text from Jumping Around

Do you struggle with getting your graphics and surrounding text to appear just the way you want it? Here are some ...

Hi, I am Bob McDonalds. Thank you for teaching me how to use this. It was very useful and I enjoyed it. Once again, thank you!

Where is the Position tab to in order to select the check box named Lock Anchor?

I use lock anchor to force Word to keep an object locked to a particular line of text so that editing does not move the anchor. It seems to work for me but am I mistaken?