Please Note: This article is written for users of the following Microsoft Word versions: 97, 2000, 2002, and 2003. If you are using a later version (Word 2007 or later), this tip may not work for you. For a version of this tip written specifically for later versions of Word, click here: Adding Captions.

Captions are normally included as a design element of a document. For instance, your design may dictate that every table needs to include a caption that identifies the table. There are two ways you can add a caption in your document. The first is to create your own, and the second is have Word add the caption for you.

If you want to add your own caption, simply start a new paragraph and type the caption. Then make sure that the paragraph is formatted with the Caption style.

If you want to instruct Word to add the caption, follow these steps: 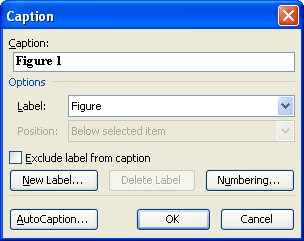 Since there are multiple steps to insert a caption in this fashion, you may wonder why anyone would use Word to add the caption. There are a couple of reasons. First of all, when Word inserts the caption there is a certain amount of uniformity that is used. You can specify the same label to appear at the beginning of each of your captions. Second, the number that is added to the caption is created as a sequence field. This means that even if you later move the caption, the numbering of the caption will be automatically updated and corrected by Word. Finally, if you aren't comfortable working with styles, using Word to add the caption precludes you from the necessity of assigning styles.

WordTips is your source for cost-effective Microsoft Word training. (Microsoft Word is the most popular word processing software in the world.) This tip (890) applies to Microsoft Word 97, 2000, 2002, and 2003. You can find a version of this tip for the ribbon interface of Word (Word 2007 and later) here: Adding Captions.

Excel is usually more flexible in what you can reference in formulas than is immediately apparent. This tip examines some ...

Tools on Developer Tab are Unavailable

Want to add some macros to your workbook? What do you do if you try to add the macros but the program has disabled the tools?

Adding Buttons to Your Worksheet

You can easily add a button to your worksheet that will allow you to run various macros. This tip shows how easy it is.

Word allows you to automatically create captions for various elements of your document, such as figures and tables. These ...

Ever want to use Word's automatic figure captioning feature, without the numbering? While there isn't a way to make this ...