Please Note: This article is written for users of the following Microsoft Word versions: 2000, 2002, and 2003. If you are using a later version (Word 2007 or later), this tip may not work for you. For a version of this tip written specifically for later versions of Word, click here: Getting Rid of Modify Style Message.

Getting Rid of Modify Style Message

Like many Word users, Judie uses custom styles in her documents. Recently, in Word 2003, Judie has started getting a Modify Style message asking her if she wants to "update the style to reflect recent changes?" or "reapply the formatting of the style to the paragraph" with a checkbox to "automatically update the style from now on." Judie does not want to see this message at all; she wants her styles applied exactly the way she created them, and she will explicitly choose whether to modify a style or not.

Getting rid of this message can be accomplished by following these steps: 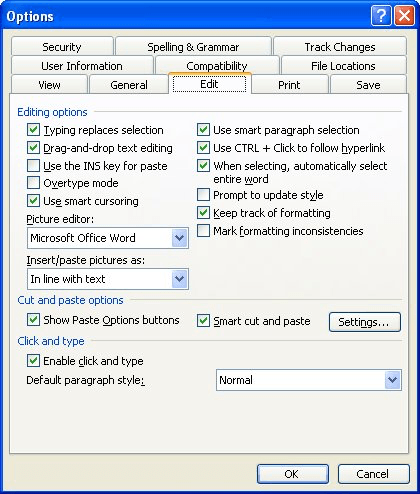 Figure 1. The Edit tab of the Options dialog box.

The short way around seeing the message—even without explicitly turning it off, as described above—is to not reapply a style. Instead, select the paragraph and press Ctrl+Q to return paragraph formatting to whatever the underlying style says it should be, or press Ctrl+Spacebar to return character formatting to whatever the style says it should be. Both shortcuts bypass the unwanted message concerning styles and get you to the same point that you would be at if you chose to simply reapply the style in the message's dialog box.

WordTips is your source for cost-effective Microsoft Word training. (Microsoft Word is the most popular word processing software in the world.) This tip (445) applies to Microsoft Word 2000, 2002, and 2003. You can find a version of this tip for the ribbon interface of Word (Word 2007 and later) here: Getting Rid of Modify Style Message.

Envelopes in Word are created through the use of styles that define specific elements of the envelope, such as return ...

Do you find yourself frequently creating text boxes and callouts? This tip describes how to change the default settings ...

Want to permanently get rid of an object rather than simply moving it to the Recycle Bin? Here are a couple of tricks you ...

As documents evolve, so do your needs for various styles. You may create new ones and, invariably, old ones need to be ...

The basis of almost all styles in Word is the Normal style. Here's a good reason why you shouldn't use it.

If you spend a lot of time getting your document styles set "just right," you don't want to take the chance that they ...