Please Note: This article is written for users of the following Microsoft Word versions: 97, 2000, 2002, and 2003. If you are using a later version (Word 2007 or later), this tip may not work for you. For a version of this tip written specifically for later versions of Word, click here: Creating Unnumbered Endnotes.

Sam wants to add endnotes to his document, but he wants them to be unnumbered. He provides an example where page 17 of his text may contain a phrase such as "Bill Gates was invited to leave Harvard during his freshman year." No endnote reference number is included in the text, but in the back of the book he would want to see "p. 17 invited to leave...Boston Globe, Jan. 3, 1988."

There are a couple of ways you can approach this. The first is to simply define the endnote references so they are hidden text. This is done by modifying the style that Word automatically applies to endnote references. You can then turn off hidden text so that it isn't printed, and you'll have the desired effect.

Another approach is to use a custom reference symbol for your endnotes. When you display the Footnote and Endnote dialog box, set your options as you normally would. (See Figure 1.) Then, to the right of the Custom Mark box, click the Symbol button. Word displays the Symbol dialog box. You want to pick the symbol that contains nothing; it should be in the very first symbol position. Click OK, and the symbol appears in the Custom Mark box. Click Insert, and the endnote is created with the "invisible" reference mark. 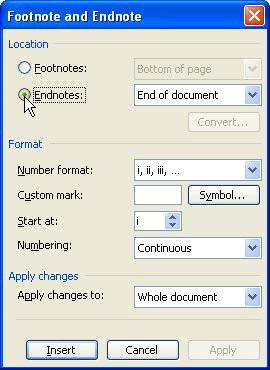 The reference mark you entered does have some width, so it will affect the layout of your text slightly. It should still provide the desired effect, however. You'll need to repeat these steps (selecting the custom mark) for each endnote in your document.

WordTips is your source for cost-effective Microsoft Word training. (Microsoft Word is the most popular word processing software in the world.) This tip (216) applies to Microsoft Word 97, 2000, 2002, and 2003. You can find a version of this tip for the ribbon interface of Word (Word 2007 and later) here: Creating Unnumbered Endnotes.

Word allows you to specify the starting page number for a document, which comes in handy if you have multiple documents ...

If you want to apply a conditional format to data imported into Excel from Access, you may run into some difficulties ...

Do you use Word to create printed forms? If so, here's some ideas and techniques you can use to make those forms look as ...

Moving Footnote Text into the Document

Need to move the contents of a footnote up into the main body of your document? You can use normal editing techniques to ...

Need to add footnotes to your footnotes? It's actually allowed by some style guides, but Word doesn't make it so easy.

Footnotes can be an integral part of many documents, particularly those written for a scholarly audience. If those ...

Very useful! This is a much better way to insert unnumbered notes than any of the other methods I saw mentioned elsewhere. Thanks, Allen!

Thank you! Your tip saved me half an hour of frustration...