Please Note: This article is written for users of the following Microsoft Word versions: 97, 2000, 2002, and 2003. If you are using a later version (Word 2007 or later), this tip may not work for you. For a version of this tip written specifically for later versions of Word, click here: Finding and Changing Word's Internal Commands. 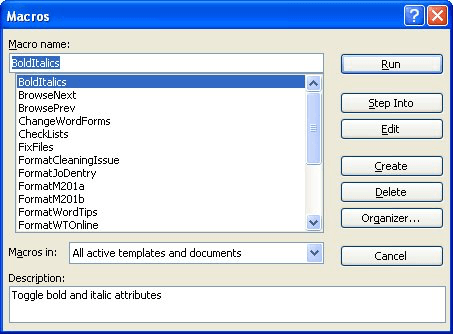 Now, if you want to change the command, continue on with the rest of these steps:

WordTips is your source for cost-effective Microsoft Word training. (Microsoft Word is the most popular word processing software in the world.) This tip (1509) applies to Microsoft Word 97, 2000, 2002, and 2003. You can find a version of this tip for the ribbon interface of Word (Word 2007 and later) here: Finding and Changing Word's Internal Commands.

Tired of wading through a bunch of formatting changes when you have Track Changes turned on? Here's how to accept all ...

Calculating the Distance between Points

Want to figure out how far it is between two points on the globe? If you know the points by latitude and longitude, you ...

Understanding Word's Object Model and how it relates to macros in VBA.

Running Macros Based on Keywords

Wouldn't it be great if Word could execute a macro every time someone typed in a particular keyword or phrase? Word may ...

Want a list of all the commands available in Word? You can get one easily by following these steps.