Please Note: This article is written for users of the following Microsoft Word versions: 97, 2000, 2002, and 2003. If you are using a later version (Word 2007 or later), this tip may not work for you. For a version of this tip written specifically for later versions of Word, click here: Keyboard Changes to Unwanted Foreign Language.

Erica wonders why Word all of a sudden change the keys to "foreign" lettering. For example, without warning when she presses the question mark she'll get an "e" with an accent, and the "~" (tilde) produces a "#". All of the keys seem to be remapped to the foreign language and Erica don't understand why. The only way she knows to stop it is to close the document and open it again.

In all likelihood, this problem needs to be addressed in both the operating system and in Word. Windows systems can have multiple language configurations installed on them. For instance, it is not unusual to have both English and French installed on a given system. (This may happen when the user is in a country—such as Canada—that has two dominant languages.)

When there are multiple languages installed in the operating system, then the system provides a way to easily switch between the languages. On most systems this is instigated by pressing Alt+Shift. If you press this shortcut inadvertently, you can find yourself typing in a language you didn't intend. The solution is to press the shortcut again so that you return to the language configuration you want to use.

You should remember, however, that the Alt+Shift shortcut may not work on all systems. For some language combinations Windows may use a different shortcut (such as Ctrl+Spacebar), and it is possible that a different shortcut than these was specified by a previous user of your system. (The shortcut can be modified in the Control Panel, under the heading of regional and language options.)

The thing that you might check within Word is whether the program is configured to automatically detect languages or not. If it is, then it is possible that the language switching is occurring because of the words you are typing within your document. You can check this configuration setting by following these steps. (These steps will only work in Word 2000, Word 2002, and Word 2003. The feature was not available before Word 2002.) 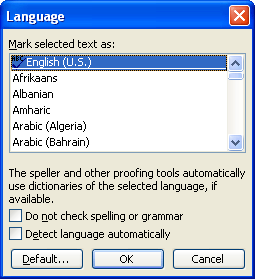 When you make the language setting change in Word, it is applicable only to the document or template that you have open at the time. If you want the change to be applicable to all your future documents, you'll want to open the Normal template before making the change and then save the template after the change is made.

WordTips is your source for cost-effective Microsoft Word training. (Microsoft Word is the most popular word processing software in the world.) This tip (7534) applies to Microsoft Word 97, 2000, 2002, and 2003. You can find a version of this tip for the ribbon interface of Word (Word 2007 and later) here: Keyboard Changes to Unwanted Foreign Language.

If you have a document that has some sort of keyword within it (such as "Section") you may want to automatically format ...

There are a variety of ways you can count information in different groupings. One convenient way is to use the ...

Connect your worksheets with other workbooks or with the world of the Internet. The ability to add hyperlinks makes this ...

What is someone to do when all of a sudden Word starts displaying text from right to left instead of left to right? The ...

Word is a program designed to work in and with multiple languages. This can lead to some problems, however, for those ...

Scratch that. it changed back to Spanish again. Argh.

Your directions to uncheck "detect language automatically" have saved me from further frustration. I had spent about a half hour fighting with it and looking for the solution. Thank you!!!!!!

Thank you, Allen. I learn something new about Word 2002 almost every day from your Word Tips.
Frank Dauenhauer

This has been driving me nuts since Office 2016. I've tried everything I could think of including the tips on this page and nothing does it. When I (manually) switch the language to English, the Keyboard changes in the English parts of the text in my emails in Outlook. This doesn't happen in Word. It's really annoying.

Great tip! That solved the problem

The fix in Excel is to press L-Ctrl + L-SHIFT simultaneously. This changed my keyboard setting back to normal. Obviously works in in reverse as well.

Thanks!
Solved a major frustration, having lost a lot of time in the past trying other solutions to circumvent the changed layout - including trial-and-error/blind-typing all keys to find the one I need... NOT a time-saving solution.

Although I unchecked the "Automatically switch keyboard to match language of surrounding text", in Outlook the keyboard changes automatically. I found no option in outlook 2013 to solve this issue.
I would appreciate should you have any recommendations.
Kind regards,
Ioannis Karadimitropoulos

Neither of the shortcuts help in my case.After selecting the whole document, I set the language to Dutch and to be sure, press the 'default'knob. Still after typing a few lines the language is set to English. It drives me crazy, because my autotext does not work with this setting.

Thank you very much. alt+shift switched my keyboard back to the normal layout for MS Word 2010.

Thanks for this. I use Alt+Shift regularly for moving items up and down lists and accidentally pressed instead of held+arrow up/down, resulting in a # every time I tried to type £. Very frustrating as I didn't know what had caused it. This sorted it! :)