Stephen commented that there were fonts that he could see and print in the Fonts window (Control Panel | Fonts), but that were not listed as available in Word. He wondered if there was a way to fix this so that the fonts would be available in Word.

There are any number of reasons that this may be the case. Believe it or not, the most likely scenario has to do with the printer driver being used by Word. While you are working on documents, Word routinely checks the printer driver to see what it can do, and then modifies what it displays based on what it discovers. The technical term for this behavior by Word is the "device context." Word is totally oriented to the "device context," which it gets from interrogating the printer driver at different junctures in the document-creation and printing process. Excel, on the other hand, is display oriented and really doesn't care much about what can or will be printed. This difference in behavior is why Word may not show all installed fonts, but Excel does.

Check to make sure that Word isn't using a generic text printer or your fax printer (the driver that actually sends a fax). Neither of these printer drivers support many of the fonts used by Windows, so those fonts—even though they are installed on your system—won't appear in Word's font list if these printer drivers are selected. There is no solution to this, other than choosing a different printer driver for your output.

Closely related to this scenario is that you, perhaps, do not have any printer driver installed on the system. If this is a new computer, this is quite possible. Check within Windows to make sure that you actually have a printer installed.

For more information on printers and fonts, you can check these resources:

The discussion so far has revolved around the availability of TrueType fonts to various printer drivers in Word. In reality, you may notice some fonts in the Fonts window that aren't available in Word, even if you are using a printer driver that supports TrueType fonts. If your non-TrueType fonts are not displaying, try these steps. (These steps are for Windows XP. You'll need to adjust them to work with whatever version of the operating system you are using.) 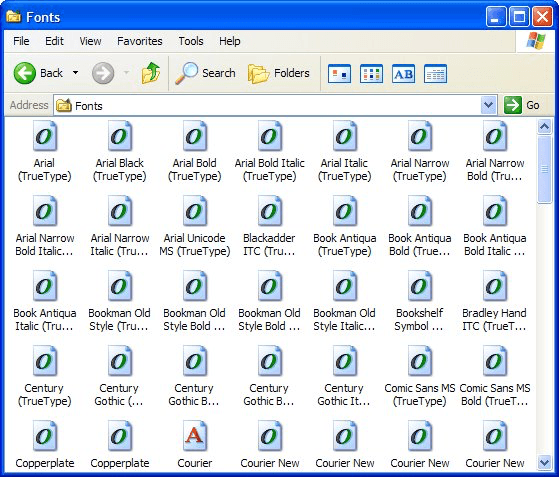 If that doesn't solve the problem, use the Control Panel to open the Fonts window, and take a look at the fonts available there. If the fonts are "Modern," "Roman," and "Script," these are pen-plotter oriented fonts and will not print to laser printers (and probably inkjet printers as well), and therefore Word does not display them if a printer that can't print them is selected as the current printer. If the names of the fonts have a series of numbers, e.g., "Courier 10, 12, 15" and a red "A" icon, these are non-printable screen fonts intended for use in Windows' system messages, dialog boxes, and menus. You can find more information about this in Microsoft's Knowledge Base:

If the fonts have a typical TrueType or OpenType icon and do not show in Word with the proper printer driver installed, it means that the fonts are probably buggy or corrupted and that you need to reinstall the fonts. (It is very easy to create TrueType fonts by converting them from PostScript or other font technologies, but it's even easier to do so badly.)

Finally, some versions of Windows (not Word) have a limit on the number of fonts they will handle. This limit is quite high, so the limit isn't often reached. If you have quite a few fonts, it could explain why not all of the fonts are visible in Word—it never learns about them from the operating system because its limit is exceeded. The answer is to either upgrade your operating system or install a font manager.

WordTips is your source for cost-effective Microsoft Word training. (Microsoft Word is the most popular word processing software in the world.) This tip (3811) applies to Microsoft Word 97, 2000, 2002, and 2003.

Turning Off Proofing for Superscripts

If you are creating small flyers (two per page), you may want to include a watermark graphic in the background of each of ...

When you format bulleted lists or numbered lists, you may be surprised if some of the bullets or numbers don't match the ...

Want to print just the current page? Word can do it, if you know how.

Shortcut keys are great timesavers when you don't want to remove your hands from the keyboard to mess with the mouse. ...

Need to produce a quick double-spaced printout of your document? You can do it by using the simple steps in this tip.

Thanks a lot solved my font problem. Using Word checks Printing option. so It can decrease the number of fonts.
I remove the unused installed printer and become OK!!

Solved the problem I've struggled with for a week or two. I run two WIndows 10 users : in one user Word had all the fonts; in the other user Word had only one or two basic fonts. In both users Excel had all the fonts. I don't have a printer at the moment and so didn't notice that Word had mysteriously defaulted to a generic printer in the one user. Thank you very much for the explanation!

Actually I installed a fake generic printer driver and set it as default. This caused the problem. Changed my printer and It worked. Now fonts are all available. Thanks.

Whew, TY, that helped - had this exact issue!
I had been trying to a new printer to work, and tried installing a 'generic/text only' driver. It must have set it as the default driver when installing. It was only showing generic (robot-like?!) fonts.

Lots of good tips, but it isn't clear why Work can't handle fonts that work just fine in Word Perfect (I use both because Word is the standard but WP works so much better for many things - like this!) . Clearly it's not a printer or corrupted font problem if WP can use them.