Please Note: This article is written for users of the following Microsoft Word versions: 2003. If you are using a later version (Word 2007 or later), this tip may not work for you. For a version of this tip written specifically for later versions of Word, click here: Tracked Changes Won't Go Away.

Kathryn is experiencing a problem related to Word 2003's Track Changes feature. It seems that when a document has tracked changes, and those changes are eventually all accepted, that they don't really go away. As a final step, she changes the view of the document to "Final" and saves it, but when the document is next opened, it has reverted to "Final Showing Markup"—and all the changes are back again.

Here is the way that Track Changes is supposed to work in Word. When you turn it on, any edits you make are noted in the document as "markup." This markup is supposed to be visible on the screen, provided you are viewing the document as "Final Showing Markup." You can either temporarily hide the markup (change the view to "Final"), or you can get rid of the markup by resolving the changes (accept or reject them). If all of the changes are resolved, then there should be no difference between the two views ("Final Showing Markup" and "Final") because there is no longer any markup to show.

With that understanding, if you go through a document and resolve all the changes, there should be no need to change the view to "Final" as the only reason to use that view is to temporarily hide changes. Yet, there are no changes left because you've resolved them all. The only reason to switch the view to "Final" is if you haven't resolved all the changes.

So, there are two possibilities in Kathryn's case. If the changes have not truly been resolved (individually or collectively accepted or rejected), then the problem is related to the view changing from "Final" to "Final Showing Markup" when the document is reopened. If this is the problem, then it is probably a simple fix. Follow these steps: 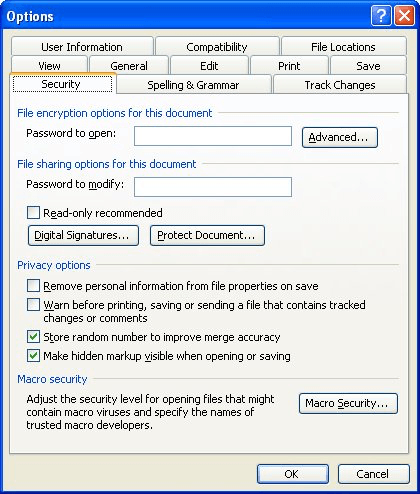 Figure 1. The Security tab of the Options dialog box.

The second possibility in Kathryn's case is that the changes have truly been resolved, but that the document is being overwritten by an older version of the document. This could happen in a networked environment—perhaps two people have copies of the document and are essentially working on them at the same time. One person gets done editing her copy, resolving all the changes, and then puts it into a network drive for the rest of the office to use. The second person works on his copy but doesn't resolve all the changes. When done (with unresolved changes), the document is copied to the network drive, overwriting the "more done" copy that was stored there before.

If this is what is happening, the solution is to make sure that each person uses a new document name before copying his or her copy to the network drive. This will avoid any overwriting that may be occurring.

WordTips is your source for cost-effective Microsoft Word training. (Microsoft Word is the most popular word processing software in the world.) This tip (3786) applies to Microsoft Word 2003. You can find a version of this tip for the ribbon interface of Word (Word 2007 and later) here: Tracked Changes Won't Go Away.

Need to normalize your data in some way so that all your values are in a given format? This tip presents a number of ...

Specifying an Order for Drawing Objects

Drawing objects can be layered over each other in almost any manner you desire. If you want to change the order in which ...

Find and Replace is a great tool, but what are you to do if your find or replace doesn't work as you expect? This tip ...

Track Changes is a great tool to use so that you can, well, "track" what changes are made during the development of a ...

Track Changes is a great tool for developing documents. If you want to copy text from one document to another, with ...

The Track changes feature in Word is a great help in editing documents, particularly if you are working with others or ...