Please Note: This article is written for users of the following Microsoft Word versions: 97, 2000, 2002, and 2003. If you are using a later version (Word 2007 or later), this tip may not work for you. For a version of this tip written specifically for later versions of Word, click here: Lining Up Numbered List Numbers.

You already know how to create a numbered list using the built-in tools provided by Word. If you create a numbered list that has more than nine items in it, you may notice that your numbers for each item do not line up properly. For instance, the numbers are not lined up on the decimal point, as you might expect. This condition is easy enough to fix; follow these steps: 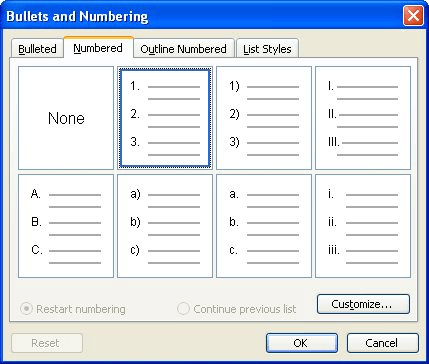 Figure 1. The Numbered tab of the Bullets and Numbering dialog box. 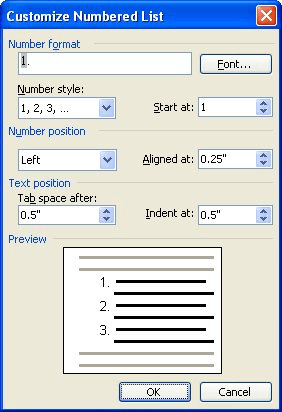 WordTips is your source for cost-effective Microsoft Word training. (Microsoft Word is the most popular word processing software in the world.) This tip (1826) applies to Microsoft Word 97, 2000, 2002, and 2003. You can find a version of this tip for the ribbon interface of Word (Word 2007 and later) here: Lining Up Numbered List Numbers.

Zooming with the Keyboard

Want to zoom in and out without the need to use the mouse? You can create your own handy macros that do the zooming for you.

Specifying a Date Range in a SUMIFS Formula

The SUMIFS function allows you to specify criteria by which values can be included in a sum. Putting together the ...

Have you ever been frustrated by the automatic numbering feature in Word? You are not alone. Fortunately, there are a few ...

If you have a couple of numbered lists separated by regular text paragraphs, you might want the secondary lists to be ...

When designing documents there are two types of lists commonly used: numbered lists and bulleted lists. This tip ...

Had no idea how to align the number lists. Thank you for this wonderful tip. I'm sharing your word.tips.net with other writers:)