Please Note: This article is written for users of the following Microsoft Word versions: 97, 2000, 2002, and 2003. If you are using a later version (Word 2007 or later), this tip may not work for you. For a version of this tip written specifically for later versions of Word, click here: Changing the Height of a Font.

Changing the Height of a Font

It is interesting to note that Word does not provide any corresponding method to change the vertical scale of a font without affecting the width. There is a way around this disparity, however: You can play with the font size and adjust the horizontal scale negatively.

For instance, let's say that you have a text selection that is formatted using 12-point type. Now suppose that you want your font to be 25 percent taller, but not to have the width changed. You could follow these general steps: 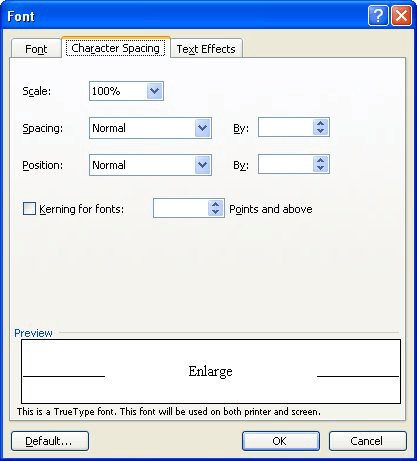 That's it. You now have a font that is the same width as its base font, but is the desired height. Depending on the font, you may need to play with the sizing just a bit to get the desired effect, but this approach should work in all instances. Just remember that whatever you multiply the height by, you need to divide the width by (always starting at 100%).

WordTips is your source for cost-effective Microsoft Word training. (Microsoft Word is the most popular word processing software in the world.) This tip (1646) applies to Microsoft Word 97, 2000, 2002, and 2003. You can find a version of this tip for the ribbon interface of Word (Word 2007 and later) here: Changing the Height of a Font.

Tired of hitting the F1 key by mistake and pulling up the Help system? Here's a couple of ways (one drastic and one not ...

Summing Based on Part of the Information in a Cell

Excel provides a variety of tools that allow you to perform operations on your data based upon the characteristics of ...

Need to get rid of the borders around a cell? The shortcut in this tip can make quick work of this formatting task.

Want a cool shortcut to make your text bold? Here's a method that fits in wonderfully with how things are done in the ...

When you upgrade from a system with an older version of Word to a system that has a newer version, your fonts may not ...

If you need to remove any explicit character formatting from some text, you'll want to commit the shortcut in this tip to ...

Just want to say "Thank you"!
I did a search for "how can I make text taller without making it wider" and I landed here and was immediately helped.
I really do appreciate what you have set up.

it was really helpful and helped me a lot .thanks.