Please Note: This article is written for users of the following Microsoft Word versions: 97, 2000, 2002, and 2003. If you are using a later version (Word 2007 or later), this tip may not work for you. For a version of this tip written specifically for later versions of Word, click here: Alphabetizing By Last Name.

It is not unusual to have a list of names in a document, and then need to sort those names. The format in which the names appear can be bothersome, however. For instance, if the names are in the order FIRST LAST, then it can be more challenging to sort them than if they are in a LAST, FIRST order. There are several ways you can accomplish the task, however. One way is with the use of tables. All you need to do is follow these general steps:

This process might sound difficult, but it can go very quickly and allows you to easily see what Word is doing during the sorting.

Another approach that doesn't require messing around with tables is to simply sort the text by words. You can do that by following these steps: 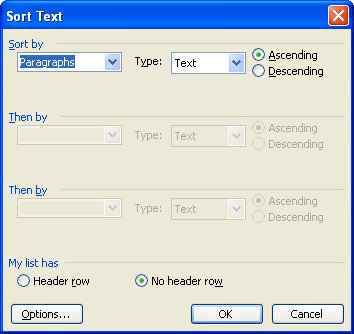 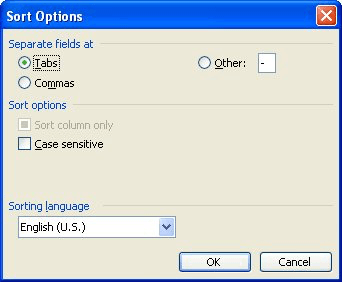 You should note that this approach only works properly depending on the construction of the names in your list. If there is only a first and last name for each person, then the sorting works fine. It will also work fine if there is a first, middle, and last name for each person—the only difference is that you would select Word 3 in step 8. Problems creep in, however, if there are two names for some people and three for others. In those instances, even the convert-to-table approach first mentioned will not work properly. In that case you must do something to make sure that Word treats first and middle names as if they are a single word; for instance, by separating them with a non-breaking space.

WordTips is your source for cost-effective Microsoft Word training. (Microsoft Word is the most popular word processing software in the world.) This tip (1563) applies to Microsoft Word 97, 2000, 2002, and 2003. You can find a version of this tip for the ribbon interface of Word (Word 2007 and later) here: Alphabetizing By Last Name.

When working with large numbers, you may need a way to quickly divide a range of those numbers by a specific value. ...

One of the final touches you can add to a document is to hyphenate it. This allows text to flow more smoothly from line ...

Creating an Animated Count Up

You might want to display a value in a cell as an upward-counting value. This might seem difficult but can be done rather ...

When sorting information, Word follows some pretty strict rules. If you want to modify how those rules are applied, you ...

Word gives you the option to sort selected groups of text. You can do text, date or number sorts on whole paragraphs or ...

Word is great at sorting simple information in tables and paragraphs. If you have more complex information (such as ...