Please Note: This article is written for users of the following Microsoft Word versions: 97, 2000, 2002, and 2003. If you are using a later version (Word 2007 or later), this tip may not work for you. For a version of this tip written specifically for later versions of Word, click here: Converting a Table into Text.

Converting a Table into Text

There may be times when you want to convert an existing table into text. To do this, follow these steps: 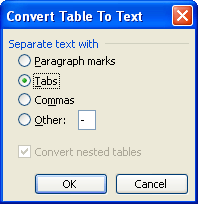 WordTips is your source for cost-effective Microsoft Word training. (Microsoft Word is the most popular word processing software in the world.) This tip (1169) applies to Microsoft Word 97, 2000, 2002, and 2003. You can find a version of this tip for the ribbon interface of Word (Word 2007 and later) here: Converting a Table into Text.

Want to know the absolute value of a number? It's easy to derive in VBA by using the Abs function.

When preparing a report for others to use, it is not unusual to add a horizontal line between major sections of the ...

If you need to limit the cells that are accessible by the user of a worksheet, VBA can come to the rescue. This doesn't ...

Insert a table into your document, and it normally appears aligned with the left margin. Word allows you to indent the ...

Depending on the type of data you have in your table, the SUM(ABOVE) function might return incorrect results. Here's an ...

Tired of Word changing the dimensions of table cells to accommodate what you place in those cells? You can instruct Word ...

1. Select the table
2. Go to the ‘Layout’ tab
3. Choose ‘Convert to Text’ (the dialog box appears to allow you to choose how to separate the data)
4. Click ‘OK’

If you want instructions on how to do this in Word 2013, then click the link to the relevant tip for your version. That link, again, is at both the beginning and the end of the article.