Recently, subscriber Debbie Galle wrote and asked how to add the Synonyms option to the shortcut menu that pops up when you right-click on text. She noted that some of her users had the option in Word 2000 and some did not. Before getting to the answer, a short side trip is in order...

The problem here is that the "trick" used in the synonyms shortcut list feature works by using some special built-in programming. The synonym list is actually built on-the-fly and the fly-out menu is then customized on-the-fly by the built-in code. Each synonym listed on the fly-out "Synonyms >" menu is actually a temporarily added shortcut sub-menu item. Because this synonym list is created dynamically through built-in programming, there isn't a single Word command that exists to drag onto the shortcut menu.

The Knowledge Base touches on this subject in article Q229749. However, the article hides Microsoft's potential embarrassment over this short-sighted omission by being overly brief and skirting around the issue. The article points out that right-click shortcut menus are context sensitive but what it doesn't say is why there isn't a Synonyms > command in the Customize dialog box nor how to add this feature to shortcut menus where one wants this feature to appear. The suggested workaround is not particularly helpful, either. It simply suggests adding the "Thesaurus..." command to any shortcut menus where one wants to provide access to synonyms. All this does is open the normal Thesaurus dialog box--definitely not the same thing as a fast-access shortcut list of synonyms. Yet, there is a way the "Synonyms >" feature can be added to other shortcut menus, which we'll get to in a moment.

Meantime, Debbie mentions that some users have the shortcut access to the right-click "Synonyms >" list feature and others don't. If they truly don't have the feature on regular text, then perhaps someone has customized some of the systems to remove the synonyms list. The feature is included on the standard text shortcut menu by default even in an upgrade, but it may have something to do with the Normal.dot those particular users had in use when they upgraded from an earlier version of Word/Office. Whatever the cause, the only way to fix this is to completely reset the shortcut menus--which means re-customizing any other shortcut menu customizations after doing the reset. Note however, that resetting the shortcut menus doesn't affect existing customization of other toolbars or menus.

You can reset the shortcut menus by following these steps: 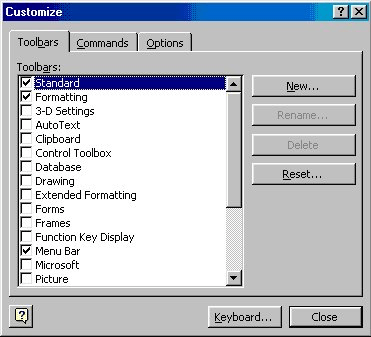 Figure 1. The Toolbars tab of the Customize dialog box.

When you construct an index you need to insert all sorts of index fields throughout your document. If you want to later ...

Creating Categories for Your Table of Authorities

A table of authorities is normally divided into separate sections based on categories you define. Here's how to create ...

Changing to the Right Thesaurus

Ever want Word to display a thesaurus for your country's version of English? This tip explains how to find the different ...

One part of the grammar tools provided with Word is a thesaurus that helps you find all sorts of word variations. One ...

Antonyms are words that have opposite meanings. The grammar tools available in Word can suggest antonyms for some words. ...