Please Note: This article is written for users of the following Microsoft Word versions: 97, 2000, 2002, and 2003. If you are using a later version (Word 2007 or later), this tip may not work for you. For a version of this tip written specifically for later versions of Word, click here: Changing Caption Numbering Styles.

If you use the captioning feature of Word, you can automatically number all your captions. For instance, all your tables and figures could be numbered using consecutive numbers. In addition, Word allows you to specify how you want the numbers to appear in the caption. To change numbering styles for your captions, follow these steps: 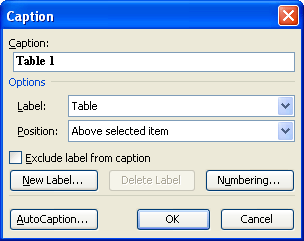 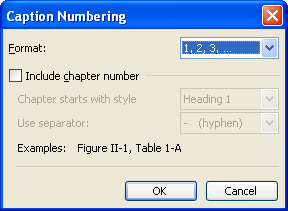 WordTips is your source for cost-effective Microsoft Word training. (Microsoft Word is the most popular word processing software in the world.) This tip (624) applies to Microsoft Word 97, 2000, 2002, and 2003. You can find a version of this tip for the ribbon interface of Word (Word 2007 and later) here: Changing Caption Numbering Styles.

Jumping to Styles in the Task Pane

Mouse versus keyboard selection of styles in Word.

Inserting Cells in a Table

You can enlarge a table by adding cells where they are needed. Just pick where you want the cells inserted, then use the ...

The Convert Text to Columns capabilities of Excel are very helpful when pulling apart information. When working with ...

Define a label to be used in a caption, and you may later want to delete that label. Here's how you can easily make the ...

Word allows you to automatically create captions for various elements of your document, such as figures and tables. These ...

Unless I'm missing something, the logical way, surely, is to use Find and Replace. Inputting Fig. in Find and Figure in Replace and then selecting Replace all should achieve the desired result.

In my thesis there are 77 figures that read as "Fig. x" under each figure. I would like to change all figure captions to read "Figure x" (instead of Fig.).
How can I make this universal change throughout the document?

Any suggestions on how to create a figure title with the number in brackets as show below?