Please Note: This article is written for users of the following Microsoft Word versions: 97, 2000, 2002, and 2003. If you are using a later version (Word 2007 or later), this tip may not work for you. For a version of this tip written specifically for later versions of Word, click here: Finding Text Not Using a Particular Font.

Hilary notes that most of the documents their company uses are standardized on a Times Roman font. However, once in a while someone will edit a document and apply a different font to some of the text it contains. She'd like to easily find those "formatting anomalies." Hilary wonders if there is a way to search a document for text that is not using a particular font.

There are a couple of ways that you can go about finding what you need and, potentially, fixing the problem. First, you could use Find and Replace in this manner: 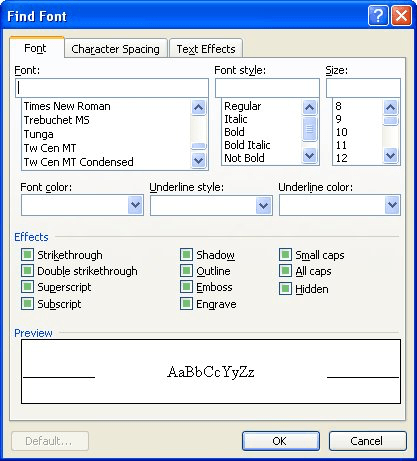 At this point, the dialog box closes and Word dutifully highlights all instances of Times Roman in your document. You can easily scroll through the document to see what isn't highlighted—these are the "anomalies" you are seeking.

If you prefer, you can use a macro to modify the font used in the document. The following is a short little macro that looks at the font used for each word in your document:

If the font used for a word doesn't match what you want, then the routine changes the font. The only thing you'll need to do to make the macro work in your case is to change the desired font name on two lines. (You'll want to use the font name exactly as it appears in the list of fonts usable by Word. Pay particular attention to capitalization.)

Another approach is to simply check each character in the document and highlight the character if it doesn't use your desired font. The following macro highlights the offending characters in yellow:

One of the nice features of this macro is that it prompts you for the font that you find acceptable. It then checks to make sure that what you enter matches one of the fonts available in the system. Because the macro checks each character in the document individually, you may need to be patient while it is running. The longer the document, the longer the macro takes to complete its work.

If you simply want to find the next occurrence of a font change, then the following very short macro is quite handy:

The SelectCurrentFont method extends the current selection until there is a change in either the font (typeface) or the font size. So if you start at the beginning of the document and run the macro (perhaps you could assign it to a shortcut key), then the insertion point is moved to where the current font ends and a new font begins.

WordTips is your source for cost-effective Microsoft Word training. (Microsoft Word is the most popular word processing software in the world.) This tip (11069) applies to Microsoft Word 97, 2000, 2002, and 2003. You can find a version of this tip for the ribbon interface of Word (Word 2007 and later) here: Finding Text Not Using a Particular Font.

Returning Blanks or Asterisks from a Lookup

Want to return more than a value when doing a lookup? Here's one way to do it by adding an IF clause to your formula.

If you have a document that has some sort of keyword within it (such as "Section") you may want to automatically format ...

Files are the basis of how information is stored on a disk drive. In order for files to be organized and effectively ...

Macros are created for all sorts of purposes in creating, editing, and processing documents. You might want to use a ...

Sometimes the characters that appear in a document can be hard to figure out, especially if the document came from ...

When writing in non-English languages, there can be many variations of accented characters that are used in a word. You ...

Great, as usual! Thanks a lot! Your solutions have helped me a hundren times!

This does not work for Calibri and here says why https://stackoverflow.com/questions/51148303/search-for-text-in-calibri-font-in-word-fails

Hi! I found this interesting and plan to use it to double check a few documents, where I can sometimes tell a coworker has "Frankensteined" different docs together and there might be some variation.

Is it possible to write something like HighlightOtherFonts() for highlighting any atypical line spacing? We adhere to a 1.1 spacing , though sometimes I find it's been altered here and there, and sometimes proofing on the screen, it just looks off but isn't. I could just Find/Replace or override the Styles, but I'd like to highlight any line spacing not set to 1.1 so I'd have a reference to show the coworker why their doc pagination may have changed.

Great tip and very useful for those, like me, who are changing their default font across scores of templates and documents.