Please Note: This article is written for users of the following Microsoft Word versions: 97, 2000, 2002, and 2003. If you are using a later version (Word 2007 or later), this tip may not work for you. For a version of this tip written specifically for later versions of Word, click here: Different Layout for a Portion of a Page.

Different Layout for a Portion of a Page

Ian is creating a tri-fold document in Word. His page orientation (obviously) is landscape and he has no problem creating the first two columns on the page. Ian can't figure out how handle the third column, however. That column needs to be rotated 90 degrees counter-clockwise from the other two columns, and Ian wonders about the best way to do this.

The first method involves the use of a table. Starting with a blank page, with a landscape orientation, you could place a three-cell table on the page. Each cell will represent a different panel in your tri-fold layout. In each cell type the information that you want to appear on that panel. (Don't worry about orientation on the third panel just yet.)

The text-box approach is similar; type information in the first two panels as you normally would, but then use a text box to create the third panel. Size the text box to whatever you require, and make sure that it contains the text to appear on the panel. Format the text box so that there is no border around it.

Now, regardless of whether you are using the table or text-box approach, you are ready to change the orientation of the third panel. Place the insertion point within either the third table cell or the text box. Follow these steps: 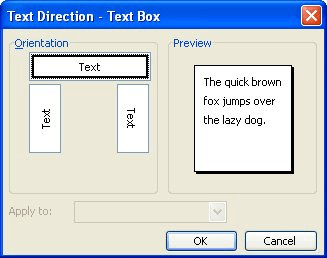 WordTips is your source for cost-effective Microsoft Word training. (Microsoft Word is the most popular word processing software in the world.) This tip (3900) applies to Microsoft Word 97, 2000, 2002, and 2003. You can find a version of this tip for the ribbon interface of Word (Word 2007 and later) here: Different Layout for a Portion of a Page.

Temporarily Changing the Printer in a Macro

You can use a macro to print to any printer you have defined in Windows. It is good practice, if you are changing which ...

Text boundaries can help you better visualize where text can appear in your document. The feature is easy to turn on and ...

Smart quotes look great in a document, but may not be right for all instances of quote marks or apostrophes. If you need ...

What is the difference between frames and text boxes? Why use one over the other? Find out here.

Wrapping Text Around a Text Box or Frame

Text boxes and frames can be used for all sorts of information and objects in a document. You can wrap text around the ...

Text boxes are often used to enhance the layout of documents. You may want a text box that adjusts its height ...